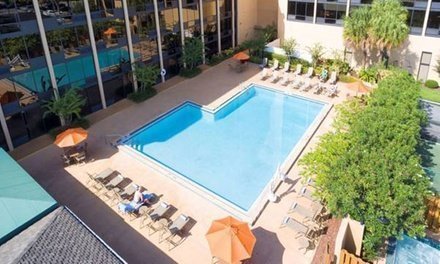 Stay at Best Western Orlando Gateway Hotel, with Dates into December – Save 34%

Family-friendly hotel with shuttle service to theme parks including Universal Orlando and SeaWorld, plus a restaurant and an outdoor pool

This family-friendly hotel is just half a mile from Universal Orlando, 6 miles from SeaWorld, and 9 miles from Walt Disney World® Theme Parks. Even better, the hotel has a shuttle service to many of Orlando’s top theme parks, saving guests hassle and money.

Located in the center of Florida, Orlando may be forever associated with the Walt Disney World® Theme Parks—the world’s most-visited entertainment resort. Spanning roughly 30,000 acres, it encompasses four theme parks, two water parks, five golf courses, and the Disney Springs® Area. There’s no shortage of things to do here: begin your day by boarding a rocket-shaped three-seater that climbs to 180 feet before entering a deep black tunnel and racing past stars, satellites, and constellations. Walk across the park to sample Moroccan cuisine for lunch, or ride a dune buggy through a haunted mansion. Before heading back to the hotel, take in the nightly fireworks, laser, and water show. One of the most popular family destinations in the world, sunny Orlando is also home to Universal Orlando—which includes The Wizarding World of Harry Potter—SeaWorld, and Gatorland.

Those hoping to shake up the typical theme-park-dominated itinerary can head into downtown Orlando’s vibrant arts district. The neighborhood boasts venues such as CityArts Factory, a multifaceted patchwork of gallery spaces, and SAK Comedy Lab, which hosts family-friendly improv shows five nights a week.