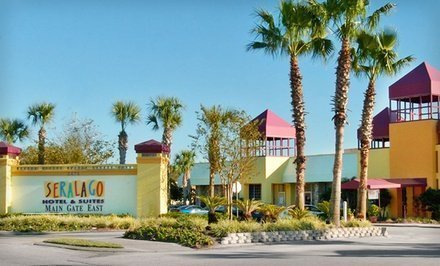 Stay at Seralago Hotel & Suites Main Gate East in Kissimmee, FL, with Dates into February 2019 – Save 35%

Located on the banks of Lake Tohopekaliga, Kissimmee sits about 22 miles from downtown Orlando and just 16 miles from the Walt Disney World® Theme Parks. The world’s most-visited entertainment resort spans roughly 30,000 acres, encompassing four theme parks, two water parks, five golf courses, and the Disney Springs® Area. There’s no shortage of things to do here: begin your day at Magic Kingdom® Park by boarding a rocket-shaped three-seater that climbs to 180 feet before entering a deep black tunnel and racing past stars, satellites, and constellations. After that, ride a dune buggy through a haunted mansion. For dinner, head over to Epcot® to sample cuisine from Morocco, Mexico, France, Italy, and several other countries. As one of the most popular family destinations in the world, sunny Orlando is home to other theme parks including Universal Orlando Resort and SeaWorld Orlando.